Rachel is our logistics lead, suggesting most of our hikes and biking excursions. When she learned we would be within hiking distance of New England’s highest peak, summiting it on foot was quickly added to the trip’s bucket list. Sure, the peak has a reputation of having the worst weather in the world, but this is summer after all and we’d just be sticking to the most well-worn trail, right?

After five minutes of research, that hike was quietly removed from our list.

Turns out, the trail skims along the ridge of the Presidentials and some people are simply blown off along their way.

Even in summer, sudden gusts can sweep hikers to a precipitous fall lurking just a dozen feet from the path, or the mercurial weather can turn on them in an instant – transforming a mild summer day into a whipping tempest in minutes. Of the three deaths recorded so far this year on this mere 6,288 foot peak, the last was caused by exposure … in June!

No, thank you very much.

We replaced hiking with the safer choice of driving to the summit.

At the base of the Mount Washington Auto Road is the most understated sign ever printed:

“If you have a fear of heights, you may not appreciate this driving experience.”

The road is skinny. Its edges are abrupt. The average grade is 12%. And very quickly in the ascent, there is nothing to the right of the car. No safe mountainside, no guard rails, no protective tree barrier, no reassuring boulders. No nothing. Just empty space and freefall.

Cars travel both ways up and down the road, slinking past each other with mirrors nearly scraping. Which means that while you’re inching past the those in the opposite direction, you have to watch left and thus take your eyes off the other side of your car where your outside tires are about to plummet off the edge, tumbling sideways over the end of the world to panicky and painful and fiery doom, thousands of feet below.

The Escalation of Anxiety

In very short order, as we skirted the mountain with those sheer cliffs to our outside, Glenn discovered how anxiety escalates from the driver’s seat. Its through-line begins at attentive and then rises to “on alert,” becoming uncomfortable and nervous, through tense and past anxious, to fearful and imperiled and then well beyond that, ratcheting up, minute-after-heart-racing-minute, to oh-so-wrong followed closely by this-was-a-terrible-idea, and climbing past stop-please-stop-I-am-begging-you-stop to JESUS-HOLY-MARY-MOTHER-OF-GOD.

And then it’s nothing but obscenities and prayers, usually at the same time.

“I will never, ever, EVER EVER EVER go up that road again,” he said.

Glenn acknowledges that he is not a brave person for anything involving heights and the life-or-death circumstance of impossibly narrow roads at impossibly steep angles with impossibly un-guardrailed death inches to the side. Inches.

Before full-on panic could set in, he had to call it one mile from the top.

Rachel drove the last mile up from this stop, and, a couple hours later, all the way down. This video was from one of the safer, “wide” stretches of the descent. Reminder: this is a two-lane road.

There were views. They were good. 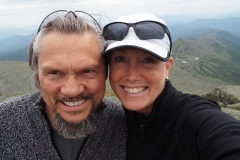 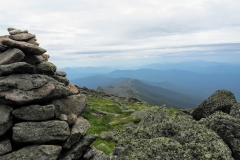 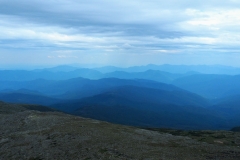 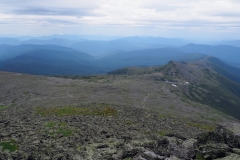 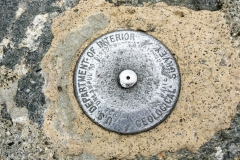 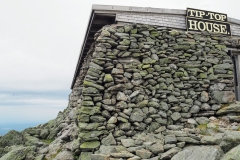 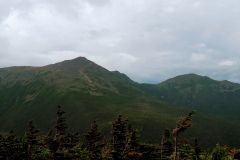 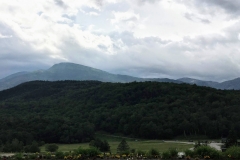