Most of the country is in the middle of an unprecedented heat wave, a dangerous dome of doom that’s crushing records, cancelling events, and claiming lives.

Around us in eastern New Hampshire, the day started cool enough, but developed with temperatures in the low 90s with humidity in the mid-60s.

When the heat index reads “Danger,” one should head indoors. If at a resort, cool off in their indoor pool. Or if in a charming small town, re-visit the perfect local ice cream shop.

What one should not do is remain outdoors for long or exert oneself unduly.

So, we climbed a mountain.

New Hampshire Is Not That

Back home, we hike and bike all over the state. We “train at altitude.” For old fogeys, we’re fit enough.

Here’s this neat thing about Colorado: it’s in Colorado. Where it’s usually quite dry. And where trail-makers blessedly employ switchbacks that make many of even the highest peaks accessible. And where a forested path means a few pines here and there until you ascend past treeline, when it’s vistas in all directions and you have to layer up to fight the chill and most insects are left to enjoy their buffets at lower elevations.

New Hampshire is not that.

New Hampshire mountains have antique trails first carved out 200 years ago, when the primary criteria was “up.” We failed to consult the contour map for Mount Chocorua, which would have conveyed that subtlety.

The Chocorua River was a cheerful companion for much of our hike. When we weren’t fording its wider sections stone-by-stone or crossing it on rustic bridges, we were treated to glimpses of narrow, shallow rapids and small waterfalls near the trail. Even out of sight, its murmurs provided constant assurance that we couldn’t stray far from our path.

Near the top of the peak where we stopped for a quick snack. The morning’s efforts were rewarded with vistas …

At one point just before we encountered the steepest granite climb, the trail cut through a waist-high thicket of blueberry bushes abuzz with bees harvesting nectar and pollinating the dainty pink flowers. Rachel thought to snap a picture only once we’d passed and found a small pioneering bush already in fruit living between two large boulders at the upper edge of the copse.

When New Hampshire mountain trails aren’t mud and roots and endless boulders, they’re steep granite and schist faces, exposed to the wind and midday sun and gouged where ice-climbers’ crampons have scrabbled and scraped for traction. You almost don’t need the occasional “blazes” – painted yellow markers indicating the trail. Instead, you could just follow those desperate etched scars. Up.

Mosquitoes thrive in meandering, almost still watercourses. The bloodsuckers breed and lie in wait for hikers too exhausted to apply yet another layer of barely effective chemical weaponry.

And New Hampshire mountains are deceptive. At 3478’ elevation, Mount Chocorua seems a hill by Colorado standards. And in its copious online reviews, hikers’ enthusiasm for the peak’s beauty may be why they underplay its physical challenges. But in its gain, distance (8+ miles), and duration, Mount Chocorua almost exactly matches hiking Mount Bierstadt, our strenuous, all-day Colorado 14-er summit back when our knees were one year younger.

And when it wasn’t 90 degrees or 60 percent humidity.

Not having to worry about the typical daily afternoon thunderstorms that threaten Rocky Mountain climbs, we started later in the day. That meant we finished later as well. As the sun got lower in the sky, we noticed toads emerging from under every shaded root and rock. Unobtrusive brown ones, elegant orange ones, and fat lumbering gray and green spotted ones, each hopping across their part of the trail, warming up their vocal cords for nightfall when we imagine their chorus would echo through the darkened understory.

Toads weren’t the only ones warming up for the evening’s activities. As we ambled along we startled a tawny hare from its foraging and watched it bound away up the slope. Further down the trail, we noticed the stark stripes of a young milk snake as it slithered out from under a tree root to begin its evening hunt of insects and, presumably, small singing toads.

Having reached the peak and savored the breathtaking views, we crept across vast and stomach-fluttering slopes of granite, their steep inclines scuffed and scratched by countless crampon claws. Later, with the most harrowing and vertical section of our return loop behind us, our attention could return inward, so our bodies reminded us that the day was indeed hot and suggested that perhaps today our ambition may have outstripped our age.

Still a long three miles between us and an air-conditioned car, our ears told us we had another, much larger hiking companion nearby.

It was an unmistakable sound.

A bear grunted and grumbled and shuffled and thumped in the dense scrub roughly 20-30 feet from the trail.

If our pace had begun to sag as the sun sank, we had no trouble picking it up again as we amplified our chatter and politely excused ourselves from that alarming invitation to learn more about how bears spend their early evening hours in the White Mountains.

In the end, hot skies purpling with the promise of sunset, we made it back to Kyrie well before evening arrived in earnest.

Our trip home back to the room included only one stop: the butcher for a pair of 18-ounce prime ribeyes. Twenty minutes after getting back, and five minutes after the steaks were off the grill, we demolished those mountain-man slabs of beef with potatoes and settled into exhausted, carnivorous stupors.

Below is a sample of the images from our day on Mount Chocorua along with a bonus video of the plateau just below the summit. 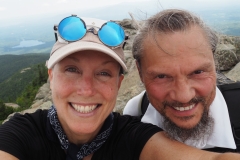 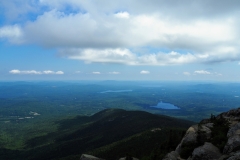 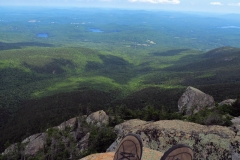 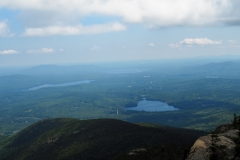 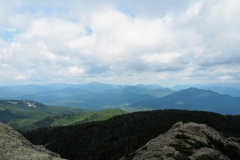 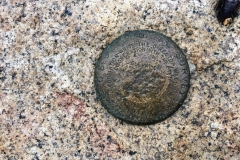 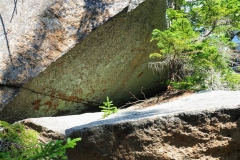 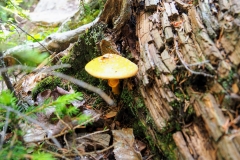 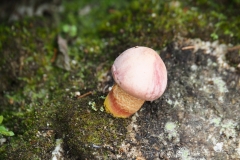 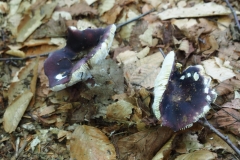 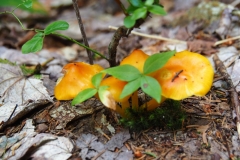 Pre-summit Plateau Video, With a Peek Over the Edge