Having enjoyed a generous slice of Americana in Farmington, we shifted our attention and appetite for adventure north to Canada. Our journey from Colorado to the rugged and deeply forested northeastern tip of the U.S. left us feeling like we had reached the edge of civilization itself. That perspective shifted once we crossed into Quebec.

Today we said our farewells to Sugarloaf’s hot tubs, trails, mountain biking and bluegrass and headed even farther north. The first leg of our journey sent us through the town of Rangeley, anchor of Maine’s popular lakes region, where we landed for a quick lunch and a look around.

At ­­­Parkside & Main, stale yacht rock issued from the speakers and disappointing fare streamed from the kitchen to well-heeled, sunburned, and chardonnay-buzzed patrons who were seated at umbrellaed tables on the lakeside deck chatting about their boats and the weathah.

After a swift thunderstorm ushered us indoors to down our disappointing salad and burger, we walked to the water’s edge and small dock nearby. The views were lovely enough, but again we discovered that the experience did not resonate for us, reinforcing the conclusion that our Haven would likely not be a lakeside property.

Pulling away from the dripping boat trailers, rusty dry docks and cluttered repair shops of Rangeley in northwest Maine, we felt like we were headed right off the edge of the map. Dark skies, driving rain and winding roads did little to assuage that sense of foreboding.

Tipping over the surprise rollercoaster crest of road at Dixville Notch (a high pass that cuts through the jagged granite-spired peaks at the tip of New Hampshire’s White Mountains) provided the one-two punch of fleeting white-knuckled terror and subsequent exhilarating relief of survival unique to touring unfamiliar alpine terrain.

Laughing nervously, we were questioning our choices at that point.

Twenty miles later, we exhaled with relief as the land opened up near the border crossing. The friendly but stern (and armed) official, with her thick tight black hair bun and Canadian-French accent, questioned us about our place of origin and plans whilst in her country, eventually concluding her inquisition with a cheerful “Enjoy your stay!”

Our stop was Coaticook, just north of the border. Months ago, when planning, we had considered pushing ahead to Montréal on this leg. But realizing that we couldn’t do such a city justice in less than a week, we cast about for other ideas. To our delight and amazement, we found Foresta Lumina.

This immersive nighttime experience is an outdoor walk through an enchanted forest. It transforms a section of Quebec’s Parc de la Gorge de Coaticook – already a stunning nature preserve – into a bewitching music and light show, a surreal storybook come alive.

With lasers and fog and sound, and countless coordinated spectrum-stretching lights, Foresta Lumina tells the story of Margaret, who decades ago communed with the fairies to evade the wicked spirits and secrets of Coaticook’s wooded valley.

As with any good fairytale, this begins with peril.

From 10pm to midnight we trekked the forest paths, often precarious, seeing and hearing how Margaret and the fairies overcame tenacious, diabolical menaces.

But not all the peril was from the light show.

An early part of Foresta Lumina includes the longest suspended footbridge in North America. At the Royal Gorge four years ago we discovered how much Rachel doesn’t like suspension bridges … in the daytime. (Discovery: “tears of terror.”)

Night is no better.

The adventure across this evening’s 185-yard swaying bridge turned into a tight-gripped, vertiginous, foundering pitch that almost devolved into a crawl back the way we came. But moving slowly enough, with frequent gazes at the brilliant stars overheads, we hand-held to the other side.

And then it got better.

Another Place and Time

The other traverses and visual effects were not unsettling at all. They were enchanting.

The Misty Portal is one of eleven displays within the overall path. It’s an enveloping ballet of lights and mist, set to thunder and cellos, conveying rain and magic and awe. From every direction, orchestral twists on forest sounds and primal music reverberate within the cocoon of mist, syncopated with flashing rainbow pulses in hypnotic patterns.

One moment you’re within in a woods … and the next you’re without a bearing, standing transported in a dreamlike cloud-ride out of time.

Other sections are just as ethereal. Imagine each picture in the gallery at the end accompanied by an immersive sound-garden of Ramin Djawadi on a Zen retreat.

We drove over 2000 miles to walk Foresta Lumina. From within its spellbinding paths, it seemed worlds farther. 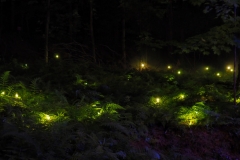 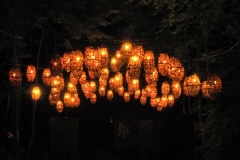 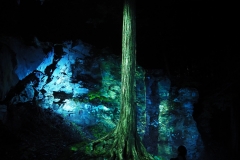 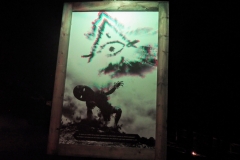 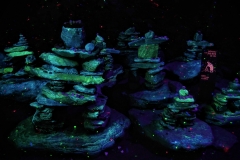 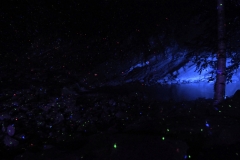 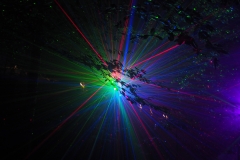 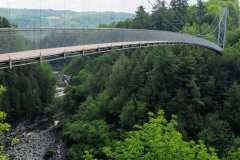 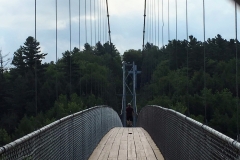 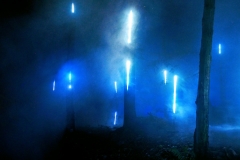 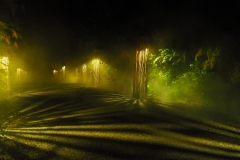 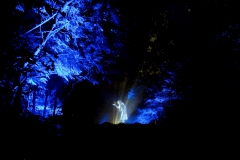